When deciding on a travel destination, it’s easy to choose somewhere in Europe or America. If you really want to push your character to its next level, try visiting the Middle-East!

I’ve got to take credit, for the first time on our trip, and mention that it was I who suggested visiting Egypt to Lorna. Of course, I didn’t have to twist her arm too hard. She loves travelling and is willing to go anywhere. The more obscure, the better.

After visiting Turkey, especially the insanity of the Istanbul bus-station, I thought we’d adjusted somewhat to the middle-eastern way of life… The Islamic call-to-prayer five times a day (with the first call waking me up at 5 a.m!)…. Cucumber and olives for breakfast… Not-drinking the water or eating salads touched by the water… Long treks and mazes to find beer… Remembering to start haggling from one-dinar instead of half of what the taxi-drivers suggest… Remembering to a

ct angry when saying “IMSHEE!” (which means go-away in Arabic) to annoying store-owners as they chased me down the road… Remembering to carry my own luggage up stairs so I wouldn’t be charged five bucks for ten seconds work…

Yeah… You’d think we would have adjusted…

Cairo is a whole different kettle of fish.

For starters, it’s good to know that Cairo is the capital of Egypt and is the fifth largest city in the world with nearly eight million people walking the streets.

I wished someone had told me this before we landed at the airport, were picked-up by someone sent from the Australian Backpackers Hostel and then driven like a rocket through the main streets of Cairo, headed for the city center. It was bad-enough being driven around in Turkey by the insane local taxi-drivers, but, although I was only just beginning to realize it, I soon found the Egyptians drive harder and crazier.

Although I was thankful our driver had turned up at the airport and was glad he could understand some english, I soon began wishing he had not bothered when I tried to put my seat-belt on and he said, “You don’t need that!”

I tried anyway but found it to be broken.

“The police don’t care!” he yelled at me.

Little did he know I wasn’t doing it because I thought it was against the law… I was doing it so I could carry-on living after the inevitable crash.

Somehow we made it to the center of Cairo, late in the afternoon and checked-in to the Australian Backpackers Hostel. 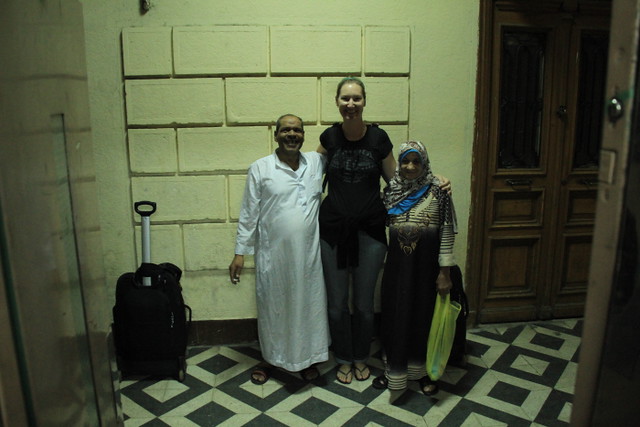 Hands-down, this place was the dirtiest shit-hole Lorna and I have ever stayed in. It was on the third floor, but all three floors were black and covered in dirt. The elevator didn’t even have any doors on it and you could see the cables as it pulled up and down. That’s when it worked, of course. 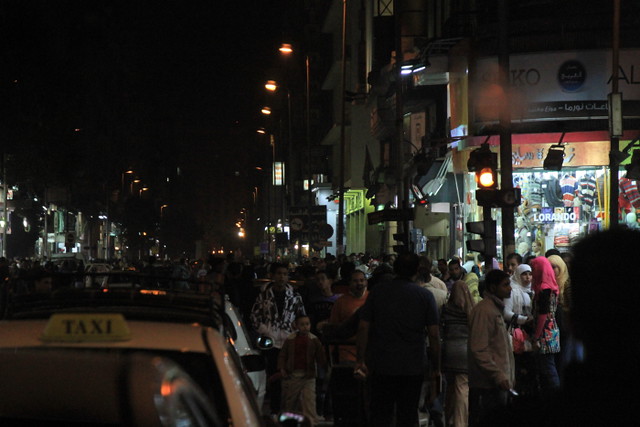 We were scared to even check-in, but it was late and they had just picked us up from the airport. Big mistake though, because our room was dirty, the beds were uncomfortable and we even found a few fleas. On moving rooms we eventually got some sleep. I don’t know how though, because on looking out the window the site we saw was enough to give you nightmares for weeks. It looked as though the Earth had experienced armageddon and we were seeking refuge in an old abandoned building. 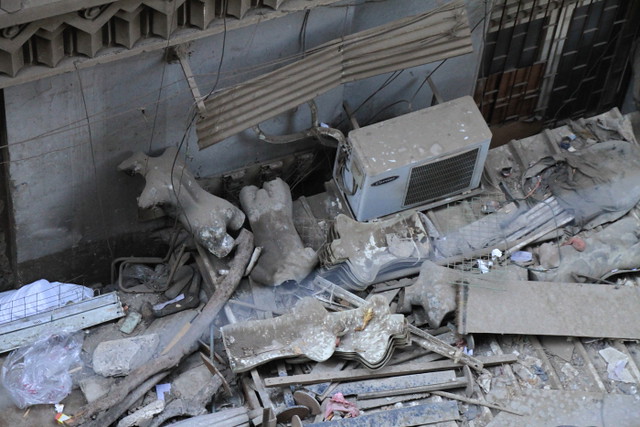 The next day, of course, we flew out the door, hopped in the first cab that came by and demanded to be taken to the King Hotel in the middle-class district of Dokki, Giza. We checked-in to the King Hotel by walking past eight machine-gun-armed police-officers protecting the building while walking through the hotel’s personal metal-detector. 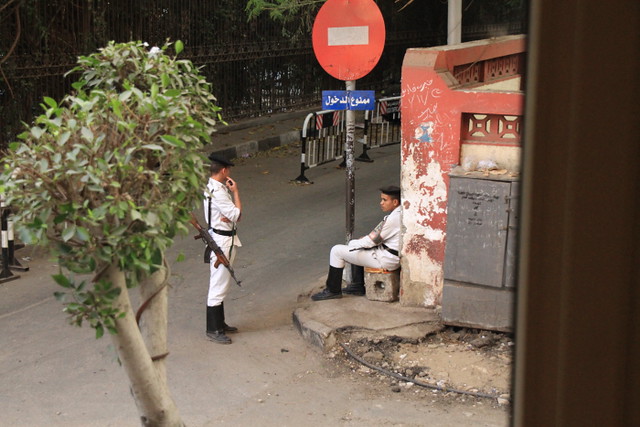 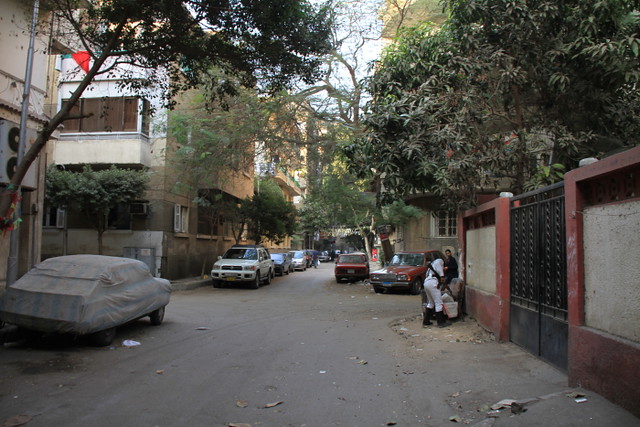 However, the King was a pretty nice hotel. The lobby-area and bedroom were really clean and the roof-top restaurant and bar was accommodating. We didn’t really choose the King Hotel, we were told it was where we were staying by Intrepid Tours, the tour group we chose to use to explore Egypt. We’re glad they chose the King though and we’re glad we chose Intrepid, because our stay there was very comfortable. 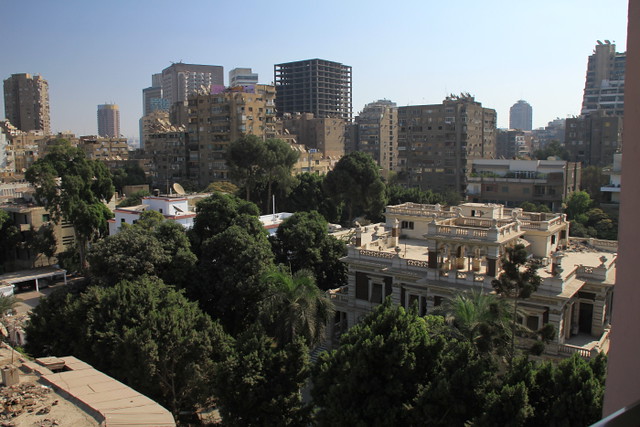 Here’s the view from outside our room at the King.

For the previous five months Lorna and I hadn’t used a tour-company, we’d done everything up to this point on our own. This time though, we thought we’d give it a go. Egypt is not the easiest place to get around or deal with the language barrier. Instead of costing around $500 AU though, it costs about $1000 per person to do an eight-day Adventure Intrepid Tour of Egypt, but… now that I’ve experienced the trip, I can confirm it is definitely worth it. I would hate to think of what we would’ve missed if we’d done it on our own. 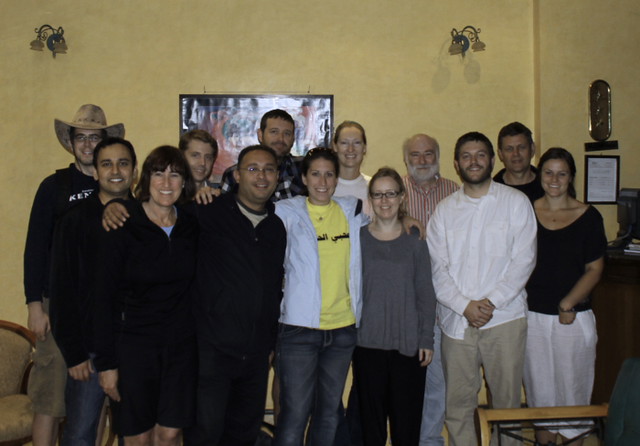 On the first night we met our tour-leader Amr. He introduced himself to the group and made the group of twelve get to know each other. They were all extremely nice people and we ended up getting along with everyone. Amr informed us of everything we were about to go through and it got us really excited to get stared.

Straight after the meeting, Amr took us to visit the Khan al-Khalili, Egypt’s most famous bazaar. A mini-bus picked us up from the hotel. As soon as we got to the bazaar, which is really just a massive market, we were met with a police-captain who said he was ordered to escort us around. (he’s the one with the walki-talkie) 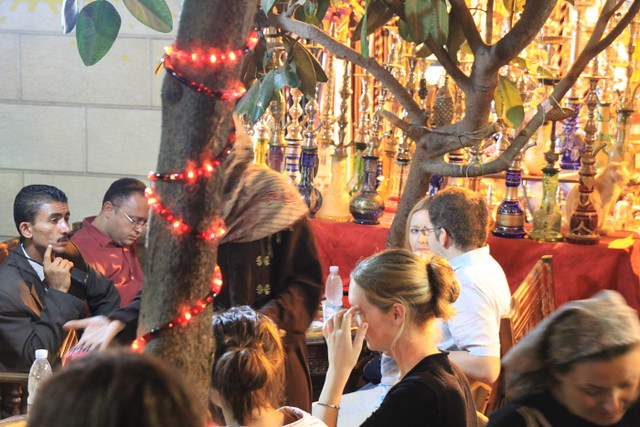 It was pretty-weird having a police escort, but we were told it was for our own safety. Mostly due to the fact that we had a few Americans as part of our group (the awesome and friendly Kristy & John). On asking Amr why Americans would cause us to need more security than normal, he said he didn’t know, but that’s what has been happening lately. If you have any idea, I’d love to hear about it in the comment section below.

After walking around for a while, we were taken to a local traditional Egyptian take-away joint and Lorna stared at her meal for a while before eating it. It didn’t taste too bad, but you have to be careful eating things your body is not used to. 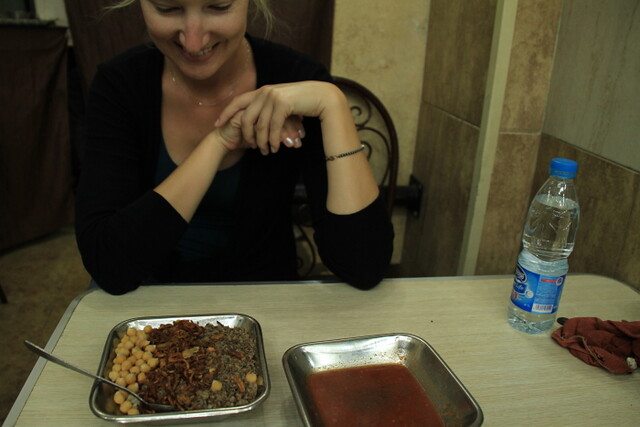 The next day we awoke at 6 a.m. to experience one of those once-in-a-lifetime days. We were picked up by a bus, headed for the Pyramids of Giza.

A few minutes away from the pyramids, we were told to look out the window. 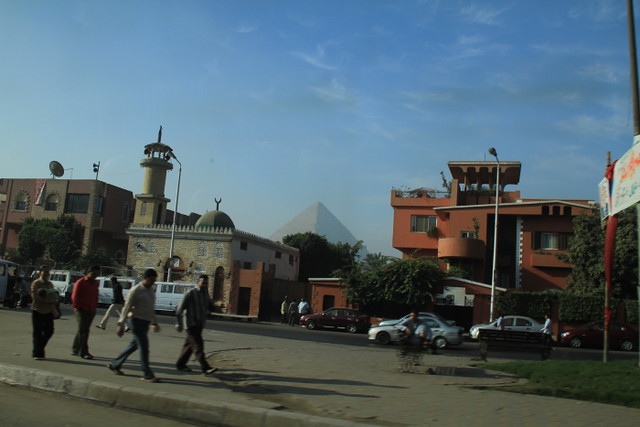 We’ve all seen what the pyramids look like on television, but when you see one of them with your own eyes as you approach on the highway, you can’t believe it’s really happening.

There are three pyramids in Giza. The largest one is called the Great Pyramid.

We were dropped off near the entrance and couldn’t believe what we were seeing. 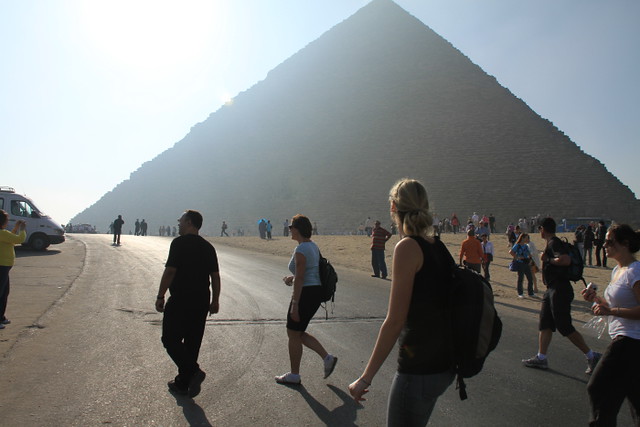 We then caught another little bus that dropped us off near a bunch of camels. The site was once-in-a-lifetime and amazing and we took it all in for as long as we could… 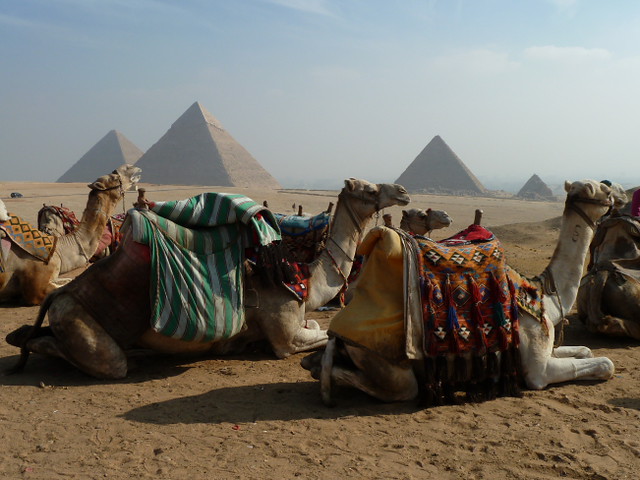 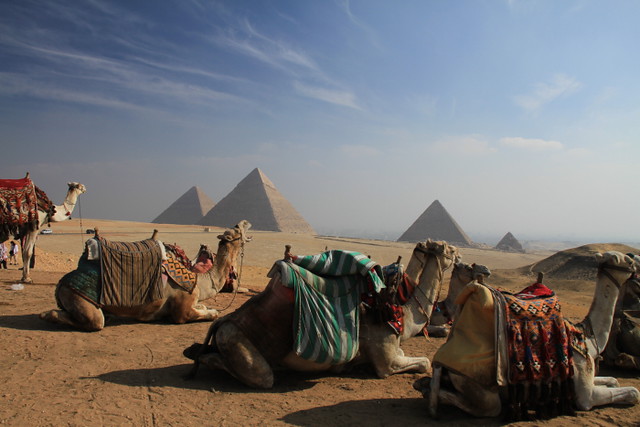 …before being ordered to hop-onboard (which was way harder than it looked!). We trotted across the desert sand on the back of our new furry-humpy-friends to get as close to the pyramid as possible and feel its magical energy. 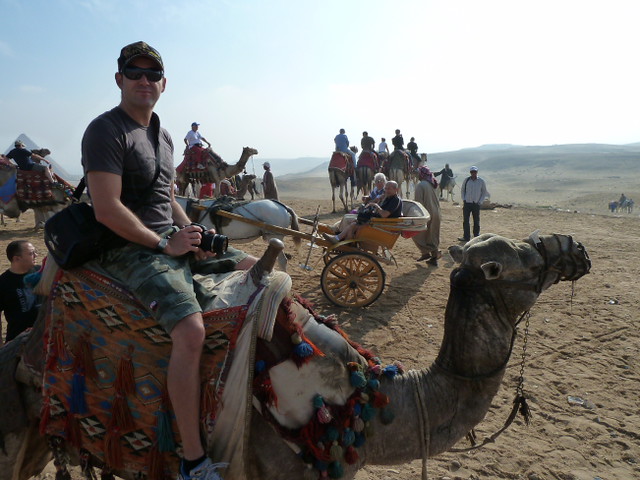 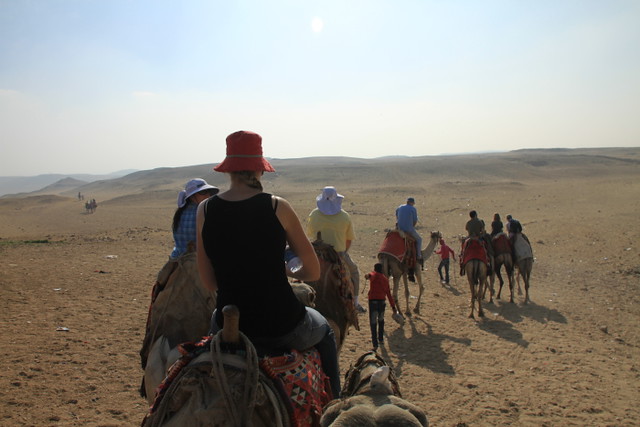 It’s thought the pyramids were built to house the fourth pharaoh, Khufu, although no one has ever actually found his mummy. The Great Pyramid is 4500 years old, which just blows your mind when you stand a few meters away from it. It held the record for being the tallest man-made structure for 3800 years. 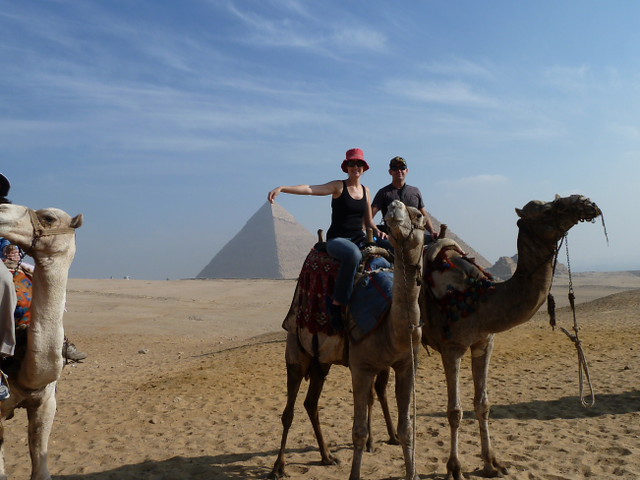 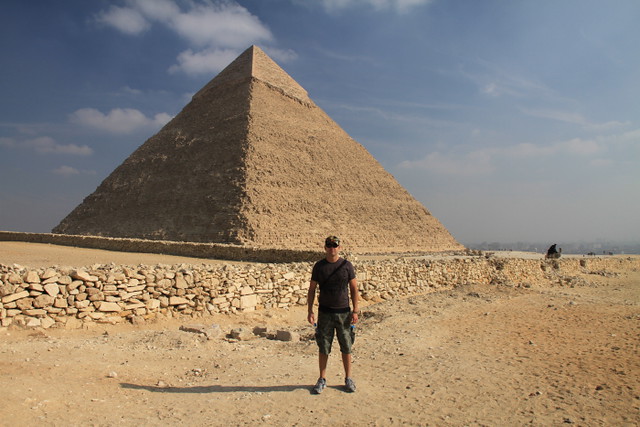 Now that I’ve filled your little brain with some decent facts, let’s get personal.

I’m one of those guys who doesn’t believe what people tell him unless he’s seen it with his own eyes. So, on gazing at the sheer gigantic-ness of the mighty limestone-monster, I quickly deduced there’s no fricking way a bunch of slaves carved-out two-tonne slabs of solid limestone (yes, that’s what they weigh), from miles and miles away, then hoisted them on their backs and walked them to the site, and then built man-made wood-and-rope cranes to levy them up forty-stories (that’s how high the bloody pyramid is!). 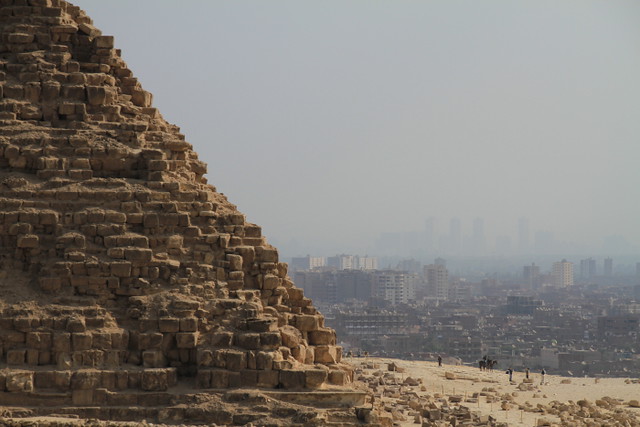 That’s what some people believe, and… I can tell you right now, without even being around at-the-time to prove otherwise, that it just can’t be true. Look at the size of the stones compared to the people! 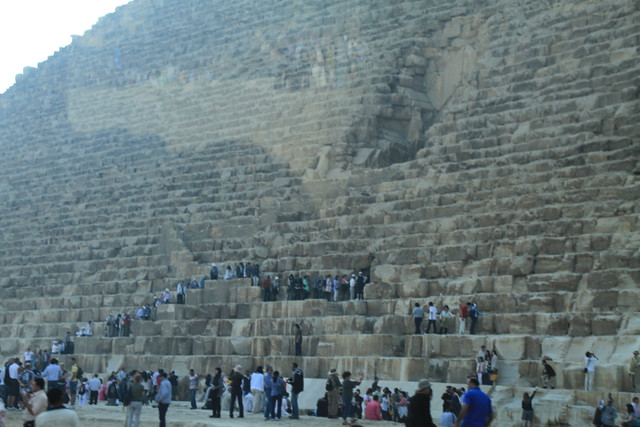 So. I asked our group-leader if he had any theories of how the pyramids were built. Amr said some people believe a twenty-five kilometer slight-ramp was built, that crossed the Nile no less! . . . which enabled slaves to roll the two-tonne limestone rocks, using tree-trunks as rolling pins, up to the designated height. 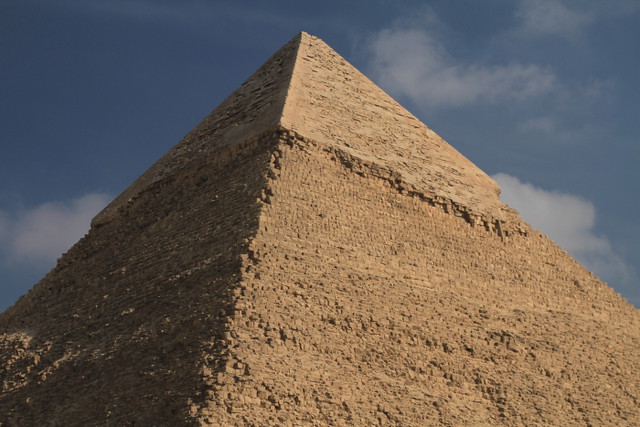 I cry bullshit on this theory too.

I’ve come to the conclusion that I’m “not sure” how the pyramids were built, but if someone told me the ancient Egyptians had help from… (don’t say it!)… extra terrestrials… I wouldn’t be too quick to dismiss it.  The fact is no-one knows how they could have possibly been built and no-one can prove either-way and you should go and see them with your own eyes and try to figure it out on your own. Let us know in the comment section below if you’ve got a theory!

Straight after the pyramids we were driven to see the Sphinx. 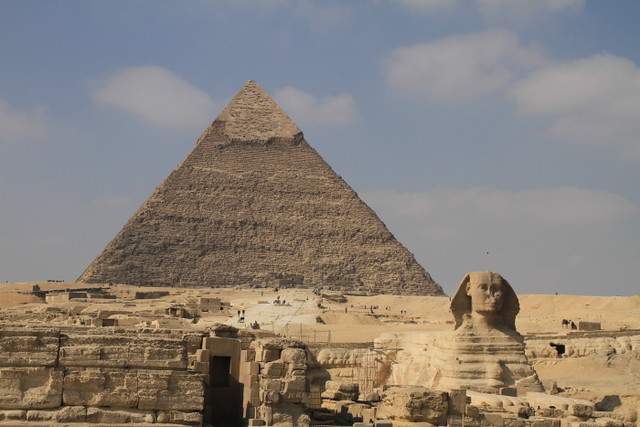 It was awesome to see such a famous and world-recognized ancient emblem in the flesh, so to speak. The Sphinx is said to be even older than the Great Pyramid. Boston geologist Robert Schoch suggests the Sphinx could be 6000 years old. The face of the Great Sphinx is believed to be that of the fourth-dynasty pharaoh, Chephren, who built the second-largest pyramid in the area. 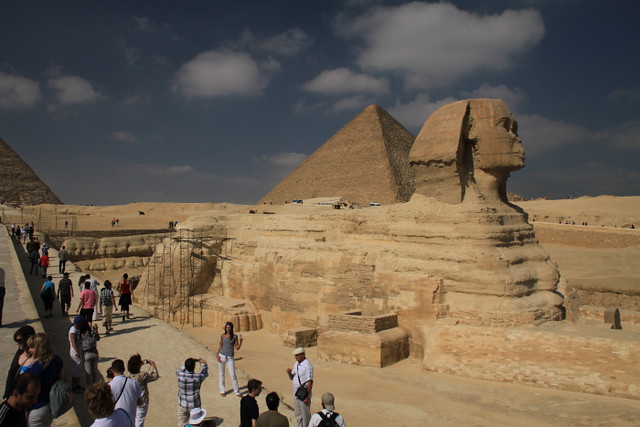 After being blown-away by the limestone-monsters of Giza, we were taken to the Egyptian Museum to try and see more than 120,000 antiquities and relics, including the famous burial treasures recovered from King Tutankhamun’s tomb. 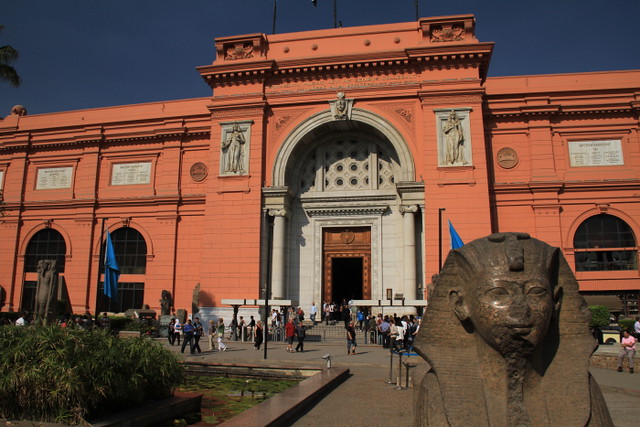 Of course, you can’t see this many items in one day, let alone one-month, so Amr showed us the highlights. One other thing you should do, which is not part of the tour with your Intrepid group-leader, is pay the extra money and visit the mummy of Tutankhamun yourself. To see his hair, skin, teeth and finger nails still in place after 3351 years is amazing.

Visiting the Pyramids of Giza and the Museum in one day doesn’t sound like a hard day, but, believe me, it’s a full-on exhausting-but-exciting adventure.

We were eventually taken back to the King Hotel and after we poured out of the bus we ventured up to our rooms and had a quick two-hour rest before quickly packing our bags in readiness for hopping on the overnight train to Aswan to continue our amazing adventure. 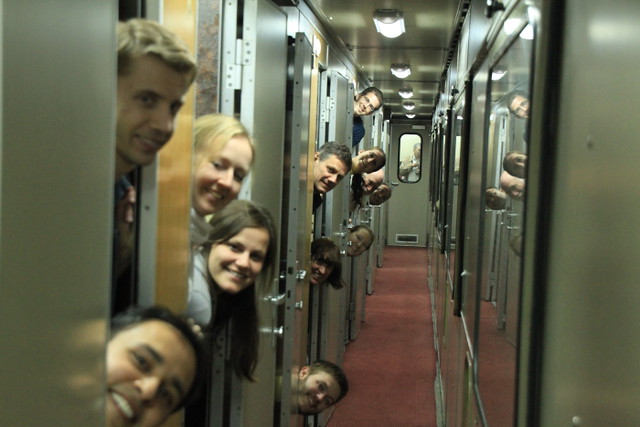 The overnight train is included in the price of the Intrepid Tour and the beds are comfortable. Thankfully, it’s two to a room. The food wasn’t too crash-hot though, so you might want to think about bringing a sandwich or something.

It took about ten-hours, but the next morning, early, we awoke to find ourselves at Aswan train station. We stumbled with sleepy-looking-heads into a new mini-van and looked forward to experiencing all Aswan had to offer. This would include a twenty-four hour sail down the Nile on a falluca and a visit to a local family on an ancient-but-still-running Nubian Village, where they’d make us dinner and throw a traditional party.

Rob Kaay is an Australian author and musician.